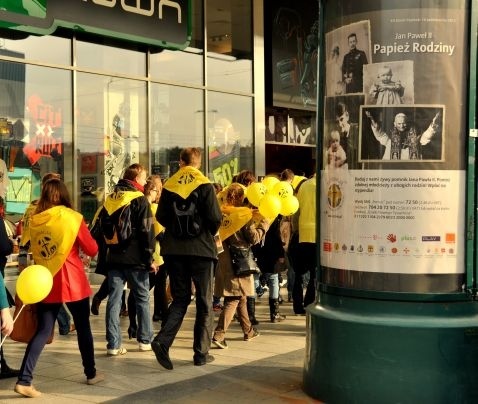 Soon the concert on the occasion of XVII Pope John...

‘Let us go forward with hope’ – that sounds this year’s motto of solemn concert which takes place on 8th October 2017 at Template of Divine Providence in Warsaw.

Saint John Paul II teaching gives us response to an important questions: Where should we search for hope? From where should we take strength so we could look forward with hope? For scholars it means that they’re constantly moving forward being close to God and having hope to meet everybody in heaven. Finally they believe they will find themselves, because they have an opportunity to learn, to get an education and profession.

For the first time in the tradition of papal concerts – this year’s will be kind of multimedia show based on Polish Pope’s life and teaching and also on scholars and foundation graduate life stories. Furthermore, One will hear references to Pope Francis teaching. At a concert many artists will perform in cooperation with ‘Gospel Rain’ band. The enriching visual side element will be graphics made using painting with sand techniques, referring to the narration of the concert and performed vocal-instrumental songs.

During the concert participants will be able to share with viewers their personal experiences connected with John Paul II, wide subject of Pope Day and ‘Work of the New Millennium’ Foundation. To do that One should tweet using #XVIIDzieńPapieski or #DzieńPapieski2017 hashtag during the transmission or add post on Foundation’s fanpage.

Musical part and performed songs will refer to this year’s Pope John Paul II Day motto. They will relate to faith and love to God and also to human values.

Traditionally the concert will be led by Krzysztof Ziemiec for years showing his support for the Foundation ‘Work of the New Millennium’.

A screenwriter and also a director of the concert it Grzegorz Sadurski – creator of programs, concerts and other events of religious character, polish Christian scene animator.