>General>Three Kings’ March with Our Fellows 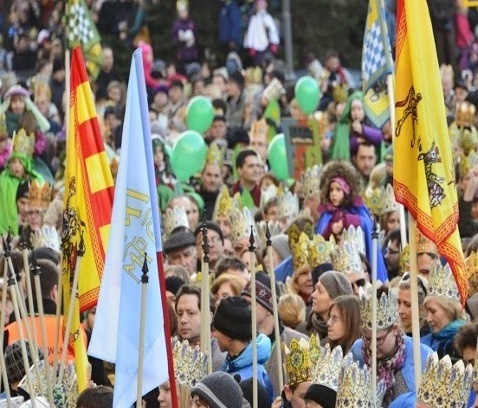 Three Kings’ March with Our Fellows

On January 6th, for the last 6 years the residents of Łódź have had an unique opportunity to travel into the past. Marches were organized also in Warsaw, Katowice and in many other main cities of Poland. Scholars of the  Dzielo Nowego Tysiaclecia Foundation took a great deal of time to help to prepare them.

The 6th is the only day when together with Three Kings: Caspar, Melchior and Balthazar, the crowds of residents are going to the Bethlehem crib.  They march through the streets, sing the Christmas carols and watch plays: the dialogue with the God’s angel, the fight of angels vs devils and the scene at the Herod’s courtyard. All to commemorate the events that took place 2000 years ago ago.

The celabration in Łódź  began with Holy Mass concelebrated by Metropolitan Archbishop of Łódź Marek Jędrzejewski in the Mother of God of Fatima church in Łódź. Congregation has been endowed with crowns and song books, for better empathy with the climate of celebration of the Feast of Three Kings. It has also invited to take an active part in the celebration through common singing. Youth from  primary schools have taken care of a theatrical lighting of the whole ceremony. There was a possibility to admire their acing struggles through the entire route of the march. However, the front of the procession attracted the main attention. That was the part where uniforms on a horses presented themselves nobly. Behind them a chaise was carrying Three Kings, there were marching angels and devils and all the crew of residents of Łódź, wearing crowns.

Among the cheerful members there were students of “Dzieło Nowego Tysiąclecia” foundation. They took part in common carolling and, what is more, they collected money for the scholarship.

The destination of the procession was in front of the Łódź’s cathedral. Residents came up to the stage, where Sławomir Kowalewski’s band played Christmas carols. After the archbishop’s speech, there was one attraction more. Good mood provided  Tomasz Bieszczada’s cabaret “Pętla Ósemki”. All people who stayed till the end of the procession received tasty cookies.

In similar manner, this special day was celebrated in many Polish cities and abroad. This year’s Three Kings celebration is going to stay for a long time in the memory of all members, for. And not because of scarves and gloves were replaced with the sunglasses, but in the light of amazing atmosphere and possibility to rejoin with Jesus Christ’s birth.