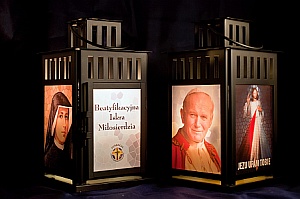 The remarkable initiative came from fellows of Foundation “Dzieło Nowego Tysiąclecia”. Because of the special attachment to the person of John Paul II, they decided  to celebrate his beatification in a unique way.

At the weekend, the beatification celebration in the largest Polish cities will be an evening vigil, which climax will be transfering of special lantern carrying the flame from Łagiewniki Sanctuary of Divine Mercy to the hands of representatives of public institutions.

Fellows want to refer to John Paul II’s homily, delivered August 17, 2002 during the consecration of the Sanctuary of Divine Mercy, when the Polish Pope urged “to deliver the light of mercy the world.” Symbolic meaning of this fire, locked in llanterns decorated with images of the Great Pole, sacred sister Faustina and Divine Mercy, will be delivered by the grantees of the Foundation to various institutions and churches. This gift will, inter alia: representatives of state and local governments, hostels for the homeless, nursing homes, prisons, hospitals and other places where “we have to kindle this spark”. Fire itself, has been already  brought to Warsaw from Lagiewniki by nuns from the Congregation of the Sisters of Our Lady of Mercy.

Before transfering the lanterns in selected churches( in these cities in Poland, where  grantees of the Foundation “Nowego Tysiąclecia” are studying, will be held vigils, during which everyone who wants to listen once again to excerpts on speeches of John Paul II and pray together. The special nature of this initiative gives also the date of its organization which coincides with the eve of Christmas Charity.

Information about the planned event reached the Cardinal Stanislaw Dziwisz, who reacted  very enthusiastically, blessing the organizers. In this initiative  all the major academic centers – Warsaw, Krakow, Wroclaw, Lublin, Bydgoszcz, Gdańsk, Katowice and others have been engaged, gathering more than 800- scholars studying which are in the Foundation. The remaining part, reaching a total of two and a half thousand people, young people supported by scholarship program spontaneously undertake the organization of this initiative in local communities. They hope that the idea of ​​transmission of the “fire of mercy” will spread in smaller towns.