>General>And the three Magi arrived from the east! 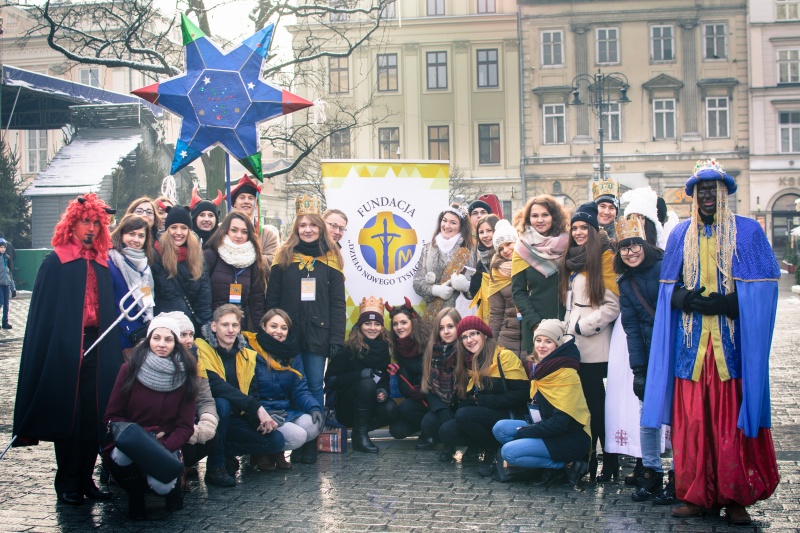 And the three Magi arrived from the east!

Frost. Snow. Midwinter. Carols, pastorals and street nativity plays resounding from the castle square in Warsaw. This year for the eighth time took place Three Magi Procession, in which participated hundreds of involved and singing inhabitants. Today on the Krakowskie Przedmieście reigned crowns: red, green and blue ones… – every kind under the sun! Also, there were camels, horses, donkeys and of course the three Magi!

That day shows that scholars from FDNT aren’t afraid about any weather conditions. With thick scarves wrapped up they went to the streets with cans, crowns and stickers in Warsaw, Krakow, Bydgoszcz, Wroclaw, Torun and Opole. Their hands were shaking and their noses were red from the cold, but in spite of all they were approaching to the men, giving them crowd, songbook and sticker.

Scholars from Krakow are heroes! In this year’s procession of the Magi they joined very actively. Apart from collecting money and giving out crowds, they took part and show their talents in nativity play and concert. They were also technical support for organizers and tried to ensure the safety of guests, especially the youngest ones.

In Warsaw, scholars turned out to be a big support for the organizers of the Procession. Not only participated in the Organization of the street nativity, but also kept custody of the staff for the volunteers, in which you most frozen could find their shelter and have a cup of hot tea. First of all, they were bravely collecting money, sending smiles all around, and singing Christmas carols.

Also, scholars from Wroclaw actively participated in the organization of the Procession. They provided technical assistance, carried flags, set up a market and decorated the stage, provide security, especially the smallest ones and carried if there was crowd on everyone head.
The central celebration of the Epiphany Procession in Warsaw ended with a concert of Christmas carols by Arka Noego. Piłsudski square was extremely colorful. Even Frost didn’t deprive voices of people who was there. Together with the band they gleefully sang to the glory of the infant Jesus.