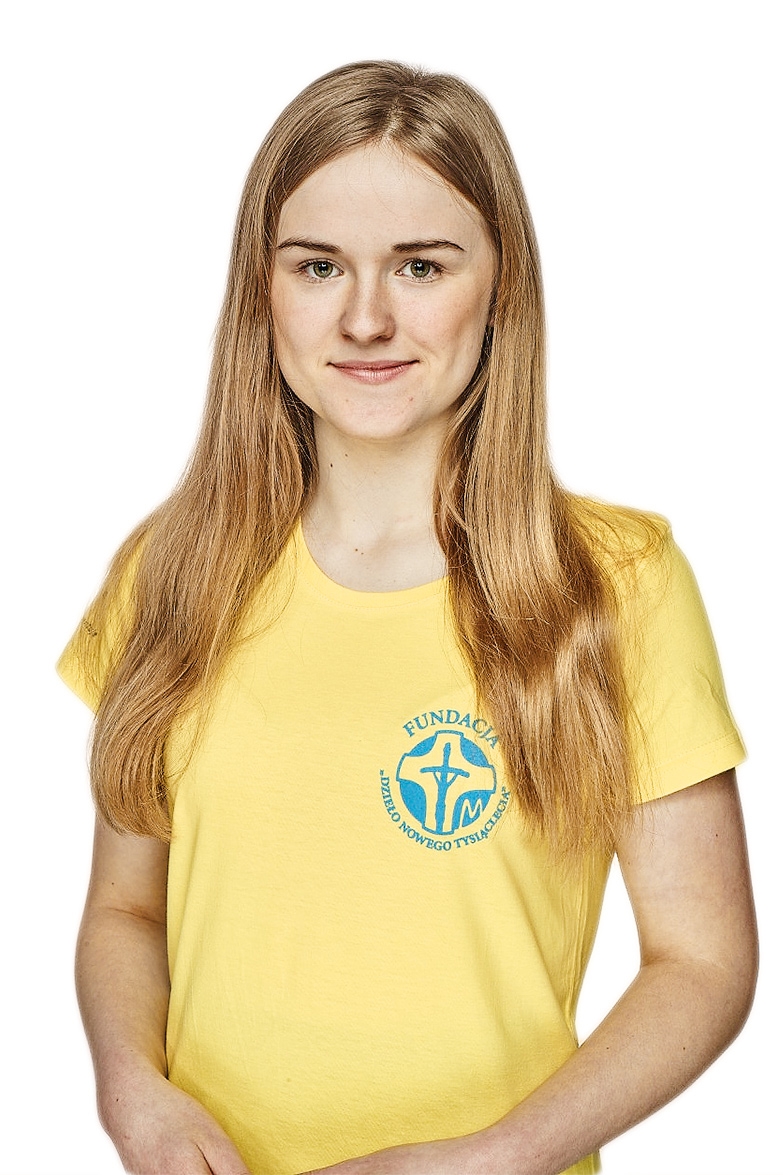 Kasia – to the Foundation went through details from friendly priest. There she understood, that education is the way to change herself and the whole community. As she tells – being a scholar is a huge lesson of mercy and responsibility for her. The Foundation gave her the courage to seek other, so today she belongs to community of evangelization and youth community at hers congregation. Passion for learning, which is also developing thanks to the Foundations’ support – was stimulus to founding a school discussion club of behavioral economics, which she also leads. For her the most beautiful thing in other scholars is humility, that they are endowed.

I came to the Foundation in 2013 through details from friendly priest. However, my desire to “dzielo” began a few years before when, as 7 years old girl went with my aunt and uncle on my life trip – to the Trojmiasto! At some point, leaving the church I found myself in the middle of the wave of yellow t-shirts. I was seeing and feeling one thing – from a group of these young people beats the beauty and joy. When I grow up I want to belong to them! And though this memory is very blurry, I managed to understand it, when I was running in yellow t-shirt during my own foundational camp.

Before joining the Foundation I was little Kasia… with little dreams. I was an urgent student, but I did not know what to do next. After few years in Foundation, watching my peers – especially graduates, who started in their localities and now they set up their own companies and kindergartens – I increasingly understand, that education is my way to change myself and whole community.
Before joining to the Foundation I was trying to find happiness in what happens to me every single day. But still I missed “my own place”. I spent a lot of time on learning, reading books and on taking part in projects, but when I started to grow up it was not enough for me. I hadn’t a group of people with whom I could identify, share common passions, dreams and problems. After joining the Foundation – I gained the courage to seek other. The Foundation gave me the courage to look even further, so I joined to community of evangelization and youth community at my congregation. And so, the Foundation has become my second family.

When I think about the Foundation – I think that the most beautiful is humility, which scholars are endowed. Especially beautiful and challenging at the same time – for me was the experience of my colleague scholar, who in his family home suffered a lot. When I was listening to his story, I thought that he must have a lot of grief to life and a huge loneliness inside – which in his situation seemed quite natural. How great however he gave me a witness, when during the conversation he told me about all the people with the merciful love and respect that were present in his life, without a word of regret. That night I was happy that the Foundation gives rise to such men. As scholars we had opportunity to engage in volunteering at the July World Youth Day in Krakow. That service, has given us the opportunity to meet Bishops and Cardinals from around the world, who have shown great openness and besides memories they left also souvenires from their homelands. In the Foundation is saying a lot about the fact that we have next to us older scholars and graduates of various professions to which we can turn to for help. However I realized it only at the summer camp in Rzeszow, where as a member of the camp’s media group could learn a presentation in front of camera or art of interviewing. In school I founded and lead a discussion club of behavioral economics (Behavioural Economics Discussion Society) in which together with other students we conduct a little psychological experiments and find ways to use different theories in our environment.

Being a member of the Foundation is to me a beautiful lesson of charity and responsibility. Here always will be given to us a second chance if we just treat it seriously. In the modern world it is good to have a place where people forgive each other. It is fun in the Foundation.