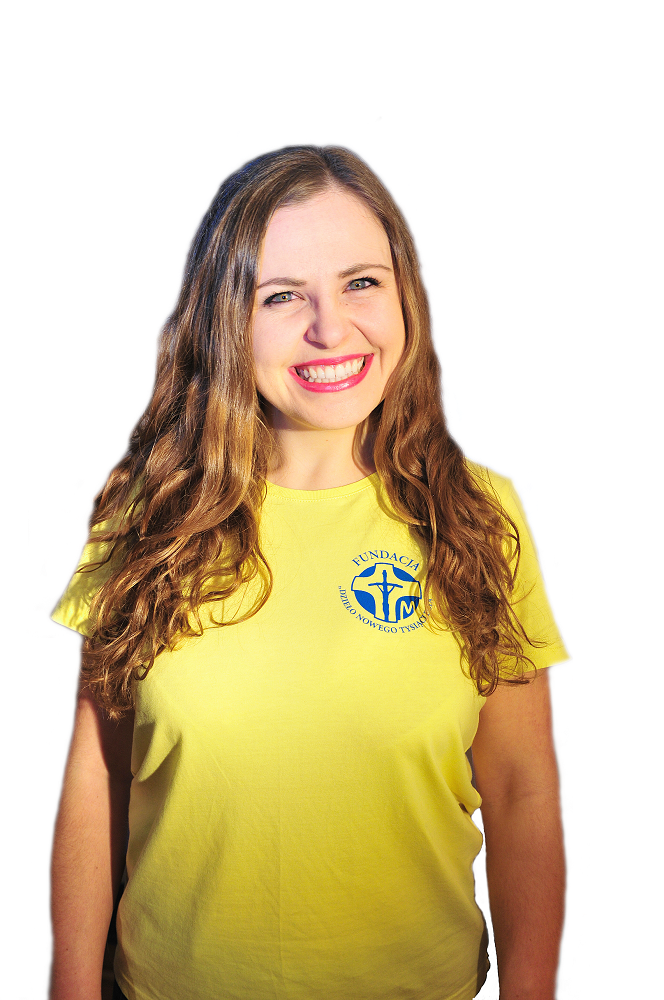 Magda – her adventure with the Foundation started in 2008. There she found strength in faith and friends, who are testimony of Christian life to her and motivation to work on herself.  Involvement in life of Warsaw Academic Society and ‘Szlachetna Paczka’ project, in which she was a volunteer, a leader, a spokesman and a supporter, inspired her to serve others. First missionary among scholars and first scholar among missionaries! She served in Hungary, Romania and also in Mexico, from where she came back a few months ago. Regardless of where she is at the moment, Magda wants to testify about God’s Love.

‘I was born in a small village called Czemierniki, settled in Lublin voivodeship. Just as a twelve year old I wanted to be part of  ‘Dzielo Nowego Tysiaclecia’ Foundation. When I saw cheerful young people wearing yellow t-shirts in TV I wanted to be among them. So I wrote long letter to ‘Mały Gość Niedzielny’ redaction and asked them for help. On my birthday I received a package in which I found accurate instruction telling me what I can do to fulfill my ambition. I was too young to join the Foundation, but I was able to join Lublin Archdiocese ‘Chance for 1000’ scholarship program.  I was its member for 4 years. The ‘Dzielo Nowego Tysiaclecia’ Foundation eventually accepted my request to be its part in 2008.

After my dad died in November 1990  all the work of caring for four children,  our household and  livelihood fell on my mom’s shoulders. Despite the fact that we could not afford toys, journeys or school supplies – our home never lacked of love, God and joy of what we have. In our orchard we arranged a ‘jungle gym’ with swings and a tree house. We were shooting from bows and slingshots ( luckily there were no victims ) made by hand.  In winter, when snow came, grandpa was driving us to a church on sledges. We enjoyed tangerines and bars of chocolates under the Christmas tree. We were working hard on farm and achieved great results in education. Difficult family situation made us respect work, persistence, humility and generosity. Life ‘before the Foundation’ has created my character and allowed me to improve it under the organization’s wing. The Foundation gave me strength in faith and best friends. They’re scattered across Poland and world, but always close and ready to leap into a fire for me. It was them who became the most beautiful ‘carriers’ of values to me. Values like faith in Jesus, ambitions, creativity, optimism and courage, strength, spirit, hard work, altruism and despite of young age – maturity. It is truly amazing experience when you  get out of a small town to the world and find similar people. People from the Foundation are constantly giving me a testimony of Christian life ( not to be confused with sweet, ideal or boring life) and a motivation to work on myself. To take actions defined by Holy Bible,  to study John Paul II teaching, to fight for holiness. Without the Foundation I wouldn’t have been able to experience it all. My many precious memories are related to the Foundation. Magical moments during holiday camps, retreats, atmosphere which I can’t describe. Mixture of God’s joy, sense of safety, madness and Holy Spirit’s presence. The list of memories grows daily, because the Foundation is the People who surrounds me. Foundation is all this situations when I hadn’t even asked for help, and it was already coming from other scholars. Foundation is moments which cause tears of happiness when I’m starting to understand how great the God is and how He works using His believers.

During my university years I was working actively in Warsaw Academic Society FDNT. I was part of the Press Office, I was taking care of fresh scholars as a foreman, I joined to most of the organization’s actions, I was responsible for contact with Polish community living abroad. I was part of academic priesthood, I was acting in amateur theaters. Especially one is precious to me – the TAM’PON (Troup of Amateurs and Malcontents PON) created and led by the Foundation scholar. I got involved in project ‘Szlachetna Paczka’ – as a volunteer, a leader, a spokesman and money supporter. For a few years I was mustering scholars who wanted to help families in need. I mention enthusiasm, generosity and sincere altruism of friends and even strangers. With approach like that I met during many actions which I was organizing with Missionary Volunteering SALVATOR.  That was there where my calls to missions and happiness from serving others were rising.  I realized that missions start here and now. I was doing my best in Poland and that prepared me to serve abroad: in Hungary(2012, 2014), Romania (2013) and Mexico (2015-2016).

I studied International Individual Humanistic and Social Course at Warsaw University. My diploma courses  turned out to be accurate choice. Ethnology intensified my willing to meet people from other cultures. It gave me open and understanding look at heterogeneity of world. I think it paid off during volunteering abroad and Erasmus in Spain. Social prophylaxis and resocialization taught me wisdom in helping people in need. I was especially interested in multicultural integration and drama applied. In John Somers (IPSiR UW) Student Academic Circle of drama applied I found a method which unites my artistic dash with my social soul.

I share drama applied with others during camps organized by the Foundation.  The animation of culture in some way merged this threads and gave me practical abilities in taking actions in local society.  I use gained knowledge in many projects arranged by me. Soon I will need it while working in nongovernmental organization. I multiplied enthusiasm for work in Mexico where I was taking part in volunteering missionary. I believe that all my experience will pay off both in my professional and personal work. Regardless of where I will be I will always testify about God’s Love.’