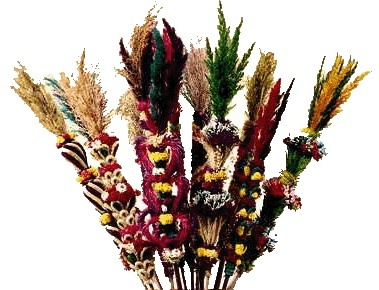 EASTER and our fellows

Monday morning – it just dawning. The village is still immersed in a pleasant dream, when suddenly I hear a squeal of young girls – this  description  could be the beginning of a good thriller while it actually is  a description of  Easter Monday in Cassubian tradition. Indeed, when asked about the Easter customs of native scholars, including ‘śmigus dyngus’, I was rebuked by a scholar of the name Emmanuela: ‘ David, in Cassubian Dyngus  is called “dëgowané” and it means  beating  girls’ legs with juniper twigs. The more you have been stabbed with them, the greater was the success.

It thus appears that what for the majority of Polish is customary splashed with water, and actually, according to tradition, splashing unmarried women ,can have a completely different dimension in a different region of the country. Profounding  the subject, while enjoying the boundless knowledge of our fellows, their origin, history, traditions in which they participate, you can find a real ethnological wonders. One of the most interesting traditions of days is Palm Sunday – the most popular version of the celebration is that parishioners are preparing a palm tree,  then go to church. It turns out that you can go a step or two, and even … eighteen meters  away – just as many measured the largest palm tree made for a competition in Chełmsko ( Silesia), from which Magda Zbrzyzny  comes from – this contest is an annual tradition, the rivalries are residents of neighboring villages, schools, circles country club, or volunteer groups. The girl says that in addition to the “palm competition” in her village, a procession around the town market is practiced. In the procession,  one person is  dressed as the King riding a donkey – to commemorate the entry of Jesus into Jerusalem. It is also worth to remind folk charts devoted to palms: It was not I who  beat you, but  a palm tree beat you;  for six days and six nights you’ll receive Easter – that’s the way  Palm Sunday is associate to Ania Kuczmejno.

On Good Friday or sometimes a week before the Stations of the Cross is organized around cities. This happens among other things in  Krynki where Julianna  Przybyłowska lives.  The route here runs through the streets of the town. Representatives of different society  backgrounds (bank, school, border guards) carry the cross for one station and prepare the meditation, other  worships have got  in their hands lighted candles. At the end , the cross is set on the market, at the outlet of every of the 12 streets . Thanks to this tradition, my place on each side is guarded by the Lord Jesus – says Julianna.
What did he Jesus say when He rose from the tomb?

Honor guard at the tomb of the Lord Jesus is  carried out by firefighters or youth is a tradition in Poland. But only  in  few places there is the solemn procession with banners, where the girls scatter flowers  and the boys carry a rosary. Ada Antoszczuk, a resident of Skrzeszew only recently discovered that  in the most  parts of the country on Easter Saturday people kindle a fire, whereas the weight of the burn – a special bush of thorns commemorate the crown of thorns. The faithful bring home at least one burned-out bush branch, which defends from  Satan. Elsewhere with  the święconka (consecrated basket full of food for Sunday breakfast)people go arund their houses  three times. It’s a sign that Christ rose again on the third day. Beata Kubica boasts that in her childhood, after the morning Mass there was a little competition. Who  run into the house and cries threshold transgression  Jesus is risen! first .Then one of the household must answer: Yes? And what did he say? – That we rise again! And we shall reign with him! – one must answer.  Only later did the family can sit down to the breakfast  where the main dish is scrambled eggs. And as Beata says, you have to beat some amount of eggs to impregnate the thirteen members of the household.

Equally curious tradition prevails in the Diocese of Zamosc-Lubaczów from which Maria Koziara comes – Since Good Friday we ride to the surrounding parishes to enter for a few minutes to church, pray, sing. It’s very likely that you will meet your family, friends, and even  crush – Mary says. The scholarship annualy making a  tour Biłgoraj – Hedwiżyn – Tereszpol – Zwierzyniec – Szczebrzeszyn – Wielącz – Bodaczów – Zamosc where she visits  up to five churches. She was convinced that a similar custom prevails in Poland, it turns out that it is not like that.

To sum up  this overview of the Polish tradition I would like on behalf of all grantees and the Foundation Board and staff, “Dzielo Nowego Tysiaclecia” to wish you all a good Resurrection of Our Lord – Jesus Christ – may we all were able to open up to another man, and every day, to discover new secrets portrayed to us by God. Happy Easter!