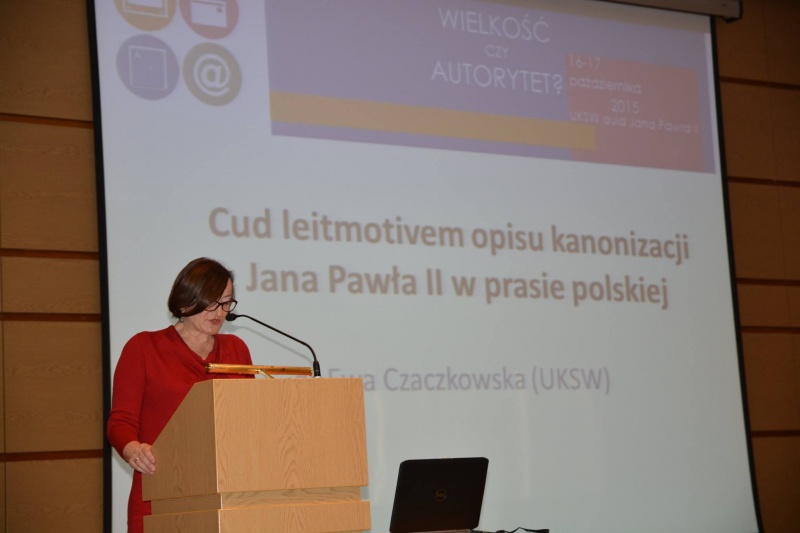 How does the Polish media communicated about the Canonization of St. John Paul II? What was making the image of the Holy Father? And finally – what level of journalistic professionalism emerges from these messages? Answers to these questions could hear during the national conference “Greatness or authority”? Pope John Paul II in communications Polish media during his canonization.”

The conference was a continuation of the session of 2007 ( “Going John Paul II’s to the Father’s House in Polish media”). This time the Foundation “Work of the New Millennium” and the “Alumni Association of Work of the New Millenium” with four universities: the Catholic University of Lublin, the Jagiellonian University, the University of Cardinal Stefan Wyszynski and University of Warsaw decided to deal with the media image of the Holy Father during his canonization and the resolution of the dispute: greatness or authority?

16th and 17th October 2015 in the building of the University of Cardinal Stefan Wyszynski was delivered 26 papers on how the media was making the image of John Paul II during his canonization. The speakers talked about not only how it looked in the Polish Television and Polish Radio. They reached to other sources, primarily for the new media. They told about how it looked on Facebook, which has happened on Instagram and Twitter. There were statements about the daily press, women’s, as well as weekly opinion. Scientific sessions were accompanied by lively discussions, during which all participants can exchange their ideas, share insights and ask questions to the authors of papers. The culmination of the conference was a panel discussion with representatives of journalists and university entitled “The condition of Polish journalism.” Among those invited to the discussion by priest habilitation professor Jozef Kloch appeared inter alia Barbara Sulek-Kowalska (Let’s go), Patrycja Michońska (Radio Plus), Magdalena Tadeusiak (TVP) and habilitation professor Janusz Adamowski, habilitation professor Jacek Ostaszewski. Discussion has been an incredibly thrilling all present. As it turns out – the condition of Polish journalism is limping. All thanks to the fact that journalists are chasing sensationalism. They want it to be about them was loud. They do not pay attention to other people. Journalism should not lead to fame, but it should favour the people.

The result of the conference will be a comprehensive publication that will be released in mid-2016 years. It will be collected papers delivered, as well as the summary of the panel discussion and commemorative photos.