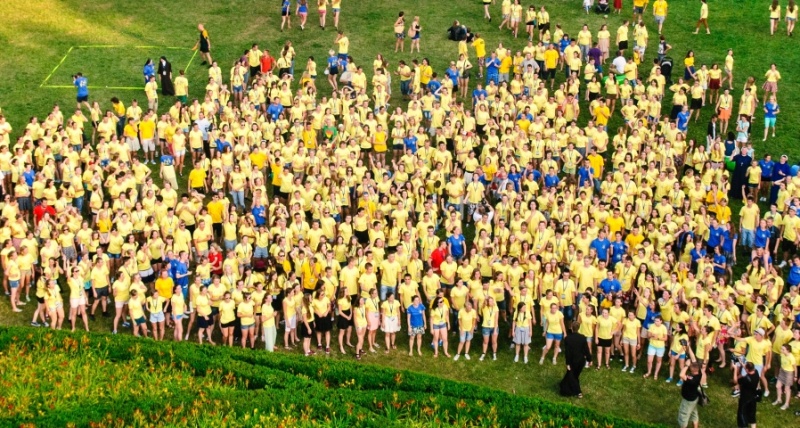 Sunny Szczecin welcomed the scholars of “Dzieło Nowego Tysiąclecia” Foundation. On Wednesday, on the 17th of July 2014, middle and secondary school students from around Poland came to Szczecin by buses or trains to participate in the annual holiday camp.

According to the rules of the scholarship program the scholars participate in a holiday camp which takes place each year and which serves both the formation and integration. At the beginning the camps based on the interdiocesan exchange. Since 2003, all the scholars gather in one of the cities to experience a two-week camp together. This year, it’s time for Szczecin.

Sometimes many hour long tiring journey leaves mark on the faces of the participants, however, meeting friends whom they saw during last year’s camp in Olsztyn the last time, provoked a smile. Embraces and conversations were endless.

By far the largest group of scholars came to Szczecin by train or coach. People living near Szczecin, came there by buses or cars. The journey often lasted many hours, but interestingly, almost no one complained. The arrival was accompanied by a curiosity of the unknown city and thinking about the camp, which gave a taste of adventure.

Energetic and resourceful volunteers helped the groups in effortless reaching their accommodations. Then the scholars were assigned to rooms where they could unload their luggage and relax after the journey.

The counselors were patiently waiting on their charges. They have already been prepared for their arrival. The scholars have been divided in groups and given the intrinsic foundation gadgets: the yellow T-shirt, ID and so called “Noneveryday books”.

Intensive work continued from the morning. Managers, counselors and volunteers had to cope with many tasks, because the scholars were arriving all day. Finally, when last scholars arrived and the lists have been closed, the camp in Szczecin can be considered officially open.

At the camp the help of volunteers of health care is extremely valuable. Their sign of recognition is a red T– shirt. In the event of deterioration in the health of the participants they will immediately provide medical assistance.

The camp is a big undertaking and a challenge for the organizers, but it is a wonderful adventure for the scholars. Let’s see how it looks from the other side.

The middle and secondary school students of the dioceses of Siedlce and Drochiczyn spent about 10 hours travelling. “We drove half of Poland – laughed the scholars- but only when we got off, we felt we are tired.”

“My diocese is coming on their own – says Kasia from near Szczecin, who is a scholar for 4 years. – So far we were travelling for a long time to get to the camps. I remember especially the trip to Lublin, it was a really long journey.”

“For a long time, together with the coordinator priest we have been planning how to travel to the camp. It was essential to book a coach in advance and to have the exact list of participants which often changed” – says the counselor of one of the dioceses.

In the morning, the Diocese of Krakow arrived as one of the first. “We were waiting in the coach until you wake up” – Marta smiles. Indeed the accommodation located on Kordeckiego street began quartering very early. 12-storey dormitory made ​​an impress on scholars, especially when they learned that they can use stairs only.

None of the groups was left out. In the trams, one could meet foundation logisticians who helped the scholars with getting to their accommodations. “We’re just going for the train station to pick up the group. The day will be very busy” – said Damian, one of the volunteers.

“We were exchanging text messages from the morning and luckily it turned out that we were accommodated at the same place. I met  Ania at the camp in Olsztyn and we liked each other” – laughed two middle school scholars.

“The jam in the train was awful – reports Kamil – and what do I expect from the camp in Szczecin? Of course, I expect many meetings with friends. I look forward to Sports Day the most.

Wiola would like to study tourism in the future, so she is waiting for the days on which the group will be visiting monuments of Szczecin. “I’ve never been to this town, and I’ve heard a lot about it. I would like to see the castle and find out why Szczecin is called the Griffin castle.”

Iza is trying to figure out whether there will also be a disco this year. “I like it when we do something together. I’m looking forward to the entertaining evenings and to a visit in Swinoujscie because we are so close to the sea.”

“For me packing was horrible – says one of the middle school students – I’m glad we’re here. I’m curious about the colleges in Szczecin because I have my Matura Exam soon and I totally do not know what to do.”

“It’s simple – says Ewa, one of the scholars – I would like to make new friends, relax and explore the city, because I’ve never been here. I also look forward to the concert which is by far the best event during each camp!

“Oh, I can’t point out what I exactly expect from the camp in Szczecin. I am happy about literally every day. It is interesting to explore a new city and it is fun to talk with friends” – says Ewelina.

“I laugh whenever I recall the camp in Olsztyn – says Ola – then we had a very harmonious team and great counselor. I hope that it will be the same here.”

“I often remember the Day of Reflection, in which I participated at last year’s camp in Olsztyn. Then I was able to clear my mind and establish a relationship with God. I am very pleased that this year we are in Szczecin.”